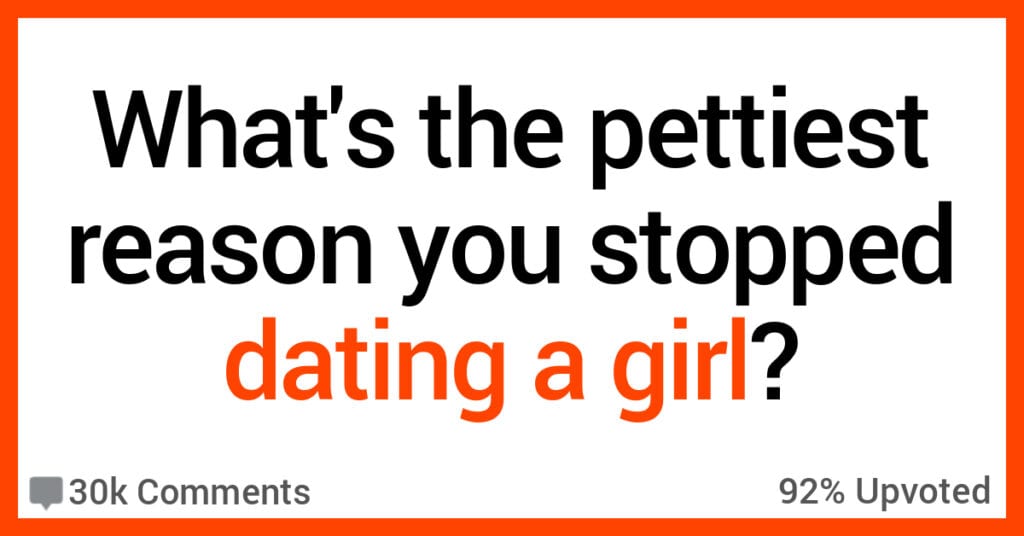 Guys Share the Pettiest Reasons They Broke Things Off

When I look back on my own checkered past of dating, one of the strangest things that stands out to me is a girl I went on I think two dates with?

There was nothing wrong with her. She was great. And yet for some reason I couldn’t put my finger on…there was just nothing. There.

It was boring. That’s all I could muster by way of explanation to myself. I almost wish I’d had a story like this that had more of something to grasp onto, even if it was silly.

What was the pettiest reason you refused to date someone? from AskReddit

Here are some very odd little reasons that Redditors ultimately decided to cut ties with women.

She was a volunteer at the Zoo and when kids asked her questions she didn’t know the answer to, she would make something up and lie.

Growing up on ZooBooks and Steve Irwin, I take animal facts very seriously.

A very attractive, fun, smart woman asked me if I wanted to go get ice cream with her.

I turned her down but I guess in a way that she felt was flirty, so she kept asking.

And finally I had to tell her I was turning her down because she had both my mother’s first and last name.

She laughed a lot and agreed we couldn’t date.

She was super hot, but she smelled. I dunno if she didn’t shower or use deodorant, but she just smelled funky.

I couldn’t do it.

My best girl friend at the time was like, “just tell her”.

How do you tell a girl you’ve known for a few weeks that she smells bad?!?! So I just stopped talking to her. Brilliant.

She didn’t know that foxes were real animals.

She thought they were mythical and just in movies.

She had the same name as my mom.

Her complete inability to follow the plot of a movie.

A guy on a dating app said he wouldn’t date me because I didn’t like oysters.

She would insist on a job interview level of formality whenever we talked. […]

The first time I asked her to my place went like this:

Me: So do you want to take this back to my place?

Her: Is this an invitation for intercourse?

She called someone “a pompous”.

Nope, she didn’t say he was acting pompous or that he was a pompous a**.

He was a pompous.

Been married twice. Both were named Kim.

I don’t even talk to Kim’s now.

She kept using the word “Redonkulous” in normal conversation.

I felt my soul dying every time I heard it.

Everything was going great, thought she was an amazing girl and we’d been seeing each other for two months.

Go to her house for the first time and it was a little messy, but nothing to write home about.

From then on, the only thing I could think about when talking or being with her was that disgusting toilet seat.

Strangest bit was, she didn’t smell like that whatsoever.

Also, when I broke it off, the egg smelling stopped. So IDK.

She once wanted a burger without chips.

I wanted one with chips.

She ate all of my chips.

Her reason was that because I wasn’t eating my chips because I didn’t want them.

I asked her if I didn’t want then why did I order them?

Ladies, if you want food, PLEASE just order it. We’re very hungry. We got those fries for a reason, dang it.

What’s the pettiest or strangest reason you’ve broken it off with someone?