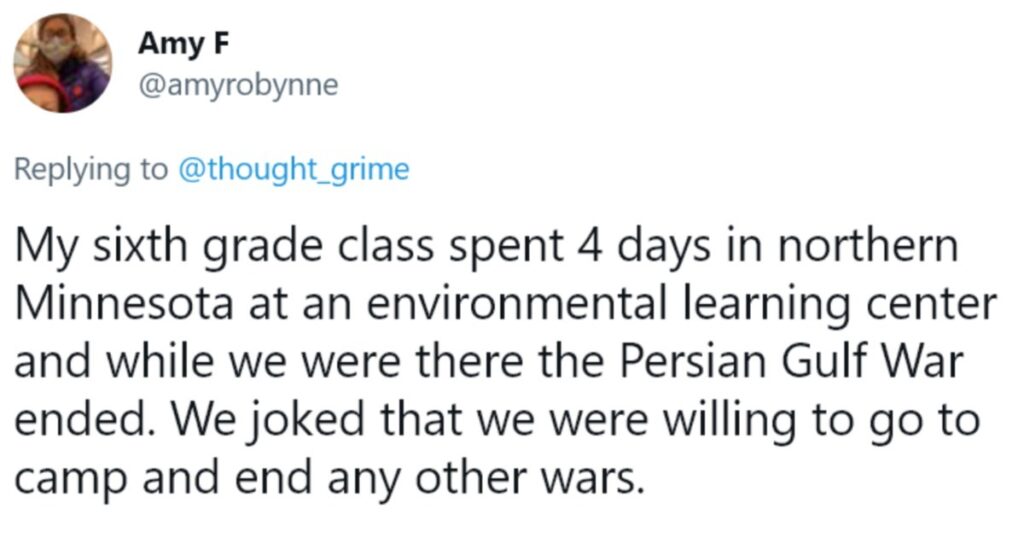 Have you ever, like, overslept and realized you missed something important? A meeting? A phone call? A class? A bomb-a** breakfast?

Well imagine that times a thousand. Imagine checking out for a bit and then coming back into reality to realize that the world had changed around you.

That’s the kind of scenario that was being discussed on Twitter in this crazy thread.

Dude, go back to the woods or whatever. Stay there as long as you can.

9. The March of Time

That is a heck of a thing to literally wake up to.

I have a friend who was in the hospital, very sick, waiting on a transplant. He was unconscious for a good chunk of March, and when he came out of it the staff had to explain a lot of things to him, including why his family was not there with him.

8. Give Peace a Chance

Also these neat macaroni friendship necklaces we made for each other.

My sixth grade class spent 4 days in northern Minnesota at an environmental learning center and while we were there the Persian Gulf War ended. We joked that we were willing to go to camp and end any other wars.

Was your grandma then getting interviewed about that for the rest of her life?

One day in high school we’d gone to my grandma’s house for the afternoon and at some point she made an offhand comment about something going on at that weird compound outside town. Turned on the news later and she had drastically undersold the situation!

The ultimate “Sir, this is a Wendy’s.”

Last June I was working a pizza shop, got a call around closing time from a guy that just finished a 20 year prison sentence. I spent at least 15 minutes answering his questions about the world, he didn’t know anything about the pandemic or our town’s curfew.

I remember a woman coming into my work, trying to work out the money. I asked how long she’d been out of the country. She said she had just woken up from a 15 yr coma. Seriously, I paid for her food and said it was a welcome back present

That would be a pretty stunning moment.

My story isn’t as bad as the off-the-grid guy:
My first car had no working radio. I’m driving to campus on 9/11, having no clue what happened. I see everyone crying and hugging, and I’m so confused. Then I see a television, and I’m stunned.

Weirdly enough, I was in Europe when this happened to. Literally the only time I’ve ever been. The entire country of Italy was talking about it. Made me realize just how famous he really was.

And the world seems less sane than ever…

An old collegue of my mother had spent 20 years in a psychiatric institution. She just got out at the end of 2019. She had to relearn everything she knew about the world. She didn’t know how the internet works, etc. Now, her first years of being free, is during a pandemic…

were out, but he assumed it was just a power outage. Drove all the way to his gig, turned on the radio for a time check, and that's when he learned he'd been on the Golden Gate Bridge during the Loma Prieta earthquake. (2/2)

What’s the biggest thing that’s ever passed you by?