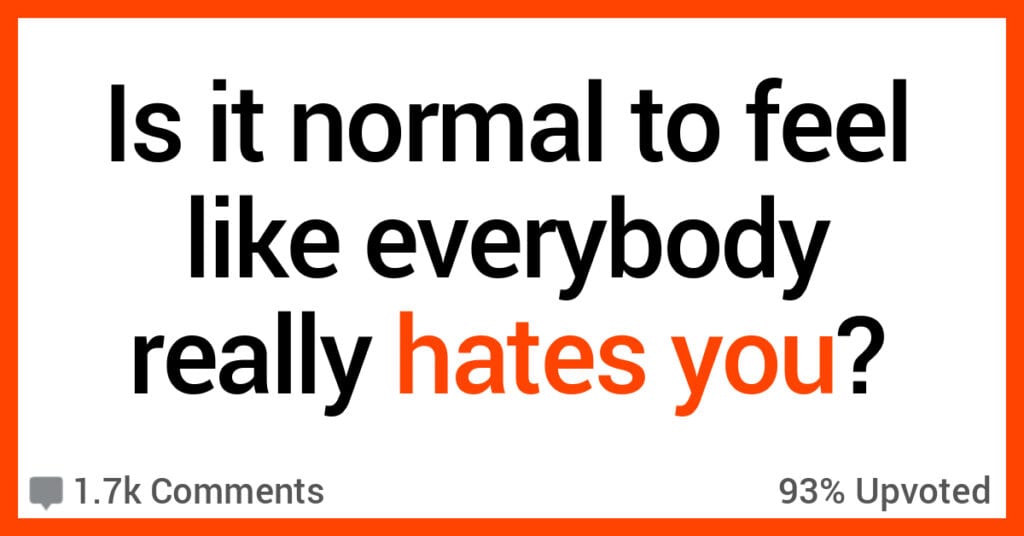 Is It Normal to Feel Like Everyone’s Secretly Mad At You?

There’s a saying that gets attributed to a lot of writers though its true origin is murky. It’s one that I come back to in my mind pretty often and it goes like this:

“You’ll worry less what others think of you when you realize how seldom they do.”

At first it feels cold and cynical, maybe even nihilistic, but that’s not how I interpret it.

We tend to live in this constant fear of the judgement we might be receiving from our peer groups, but the truth is, everyone else out there is also worried about themselves and their own issues. They’re probably not putting a ton of energy into evaluating you – they’re too busy for that.

And yet, thinking like this comes up all the time:

Is it normal to feel like everyone secretly dislikes you, being your friend only out of pity or kindness? If so, how did you over come this? from AskReddit

So what do we do about it? Here are ten pieces of seemingly solid advice from the people of Reddit.

Counseling – there is pure magic in moving your anxious thoughts into spoken word; once I heard myself speak these anxieties, they became kinda silly.

There is also magic in being able to bounce my anxious thoughts off of someone who is trained not to react to them. They are listening for the meaning and motivation behind your thoughts. Basically it’s like a doctor listening to your list of symptoms and determining what may be causing them.

I can remember being afraid of going to counseling because they might think I was stupid or crazy. It would be embarrassing!

Shift that thought…..it’s also embarrassing to have some weird thing going on in an unmentionable area, but you’re gonna go to a doctor because you’ve been to a doctor and know they are professionals that aren’t going to act like a 5 year old.

Counselors and Therapist are they very same.

[Something that helped was] the realization that I was giving people way too much credit believing they spent that much time thinking about me.

Seriously! We are pretty much the same in that when we walk away from some socially awkward conversation, that person is doing the exact same thing as you; worrying about how they sounded, looked, acted, what you must being thinking of them, analyzing every word and injecting (most often) wrong perspective, etc.

Their minds are no different than yours in that they shift to self more times than not. I call that little voice in my mind that creeps in my “Inner *sshole”.

I would never speak to a dearly loved companion the way that I talk to myself. I’ve learned to shift my perspective.

I have to do the work in my mind to keep [the good work] up.

Some people can just flip a switch and let that sh*t go, but i can guarantee that they didn’t just let it go that one time and then the anxiety never crept back in. Nope.

It just gets easier to let that sh*t go after you do the work and train your thought patterns.

The visual analogy that I use for something that I’m perseverating on is driving and seeing a billboard that catches my eye. It’s got this message that i just have to read and study so I pull over and just keep looking at it and I just get stuck at this billboard not being able to divert my attention enough to get back on the road.

And sweet Jesus, sometimes I just plow my car right into that mother f*cker and I’m really stuck. That billboard is not gonna move. I have to move. I have to shift my thought process just enough to get back on the road. The best is when you can see that billboard up ahead (because anxiety be what it be), roll down the window, and flip it off as you punch the gas.

I’ve really done my work on feeling like an imposter. […] I was one of those kids in class that was afraid of their own voice, never asking any questions, because what if they know I don’t know how to do this thing?

#2, most people are stuck on self.

I was feeling like sh*t my whole life, but I also was afraid of therapy bc I thought that it would be too expensive, that I need years to find the one therapist who can help my very bad condition etc….

Instead I tried to cure myself with alcohol and drugs, you can guess how that worked. After 20 years of thinking about going to therapy, I finally did it, it was just how you say: hearing myself speaking out these thoughts was half of the rent.

It took me four sessions, best 500 bucks I ever invested, know I’m full of energy and good thoughts.

It happens from time to time, that the anxiety is crawling back, but therapy gave me the right instruments to deal with it

Sometimes it’s helpful to know why the anxiousness keeps creeping up, and it’s even more important to have a positive attitude towards its presence.

I’m not saying trick yourself into enjoying something unpleasant, because that’s inauthentic. But the anxiety is coming from our internal warning system, whose only two main functions are to keep us safe and productive.

Our minds know we function better with human connection, so sometimes the warning systems that need a little “calibration” go into overdrive pointing out things that aren’t necessary threats.

Like thinking everyone in your friend group pities you. Our minds know it’s within the realm of possibility for that to be a reality; it would be naive to think there aren’t any people on Earth who do that.

So go easy on your warning system, be sure to thank it from time to time, and press forward with that compassion for yourself.

[…]consistent practice WILL make good results come to fruition. Thank you again for discussing this.

I will say a big thing for me was about 6 years ago I asked a friend if they were mad at me because I felt like I had upset everyone. I hadn’t done anything, just that feeling.

He said something that hit me like a ton of bricks. He said ” No, im not mad and nobody is thinking about you.”

It didn’t all change right then, I’ve learned alot about my own self centeredness and I’ve done a lot of therapy in the past 6 years.

Its freeing to realize everyone is concerned with themselves just as you are.

8. Don’t be a self-fulfilling prophecy.

Let me be clear: If people are in your company, THEY LIKE YOU.

That feeling you have, though? That is going to keep worming its way into your mind, looking for confirmation that it’s right, even going so far as to cause you act in ways that make it right.

You might make negative faces you don’t realize. You might not respond in the way a friend needs when they need it because you miss it wondering if it was about you. You might just act weird sometimes.

When people react accordingly, you will take it as confirmation that the feeling was right all along and these people were just faking their friendship.

You would do well to heed the therapy advice and get a handle on how to recognize that feeling as nothing more than an inner guide, and to take it under advisement without trusting it, or worse, acting on it.

9. Watch out for substance abuse.

The answer is not drugs or alcohol, right off the bat. I struggled with this for years. I wish I could saw I woke up and brushed it off but honestly when I was around 21 I just stopped caring what people thought.

It got to the point where the friends I previously thought only liked me because they “had to” starting calling me and asking me what’s wrong and if I could meet up with them.

It showed me in the end that I needed to stop worrying about things that made me unhappy or upset because they were issues that were created by me in my mind to feel bad about myself.

Not that I pitied myself or think that you may be doing the same. But my advice I guess would be to just relax friend. Things are rarely as bad as you make them out to be in your mind.

The mind is a powerful thing, and what you force into it can affect you in a monstrous way. You don’t deserve that. You deserve to know that you matter, and your friend recognize that.

I like the good feeling of someone I know taking the time to send a message or post a comment or a special “like” on a video or something I’ve posted so I love tried to practice not hesitating and if something makes me think of them.

Once I started doing that I was getting more interaction back from them which helped create a positive cycle and a feeling of connection.

I think those are all pretty great pieces of advice. And if it turns out that it wasn’t in your head, that you’re just friends with a bunch of jerks, find new friends. You don’t need ’em. You deserve better.

Do you have any other thoughts on this topic?