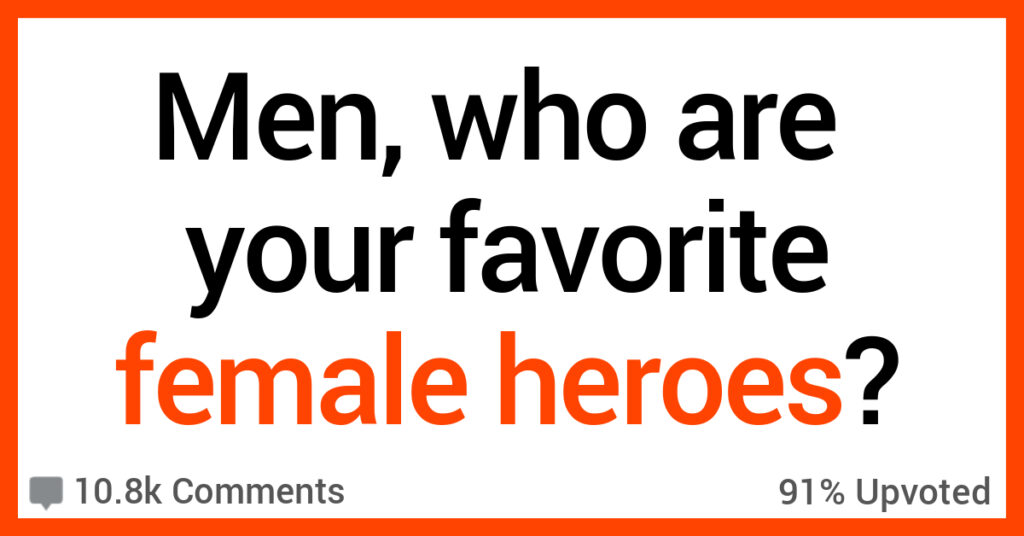 I recently saw a post like this getting spread around by a lot of friends on social media. And I think it’s important for the genders to recognize the folks who moved ALL of us forward.

I’ll be honest, it really made me stop and think.

Men of Reddit, who are your female heroes? from AskReddit

The guys of Reddit certainly weren’t at any loss for heroes.

Here are a lot of historic women most definitely worth your attention.

The sheer talent and mastery over the writing craft she employed to create several novels that are still read today is kind of mind-boggling.

Especially considering she was a woman writing in the early 19th century.

A bad**s mathematical genius who used her code breaking skills to help bring down some of the biggest mobsters in the 1930’s while they were busy running circles around law enforcement. More importantly, she was responsible for breaking up Nazi spy rings in the 1940’s, particularly in South America, and helped turn the tide of major conflicts that very possibly shifted the outcome of World War II.

And she did all of it while being mocked, dismissed, and forced to keep her work secret by order of the government. Nobody knew her contributions in taking down the Nazis until after she died and her work was declassified.

Everyone should know this amazing woman who sought neither accolades nor credit for doing what her male counterparts couldn’t even begin to comprehend.

One part of her life that really stuck with me was how she took up her husband’s position as professor when he died, becoming the first woman professor at the University of Paris.

How she moved on, even though his loss was devastating to her, is just so powerful.

She’s a retired Southwest Airlines captain, longest running member of the US Aerobatic team, has competed in 15 world championships and is on the Board of Directors of the International Aerobatics Club.

She’s also been inducted into multiple aviation halls of fame.

More importantly, as an FAA designated examiner, she tested me and granted my private pilot’s license. She’s accomplished, smart as all get out and an all around great person.

Active member of a non-violent resistance group against Nazi Germany. If I remember correctly, she was executed for distributing pamphlets promoting her cause.

She stood up for others even in the face of death. I deeply admire that.

ww2 soviet bomber pilot who was hit by shrapnel and still finished the mission and managed to land the bomber and then going under stomach surgery.

You can listen to her story on BBC ww2 witness podcast.

She’s brilliant, brave, determined, and generous. Her charity work is incredible. And she’s quite progressive *when that’s not her cultural background*–I admire anyone who had to think out their views and go against the grain, much more than someone who has “perfect” politics because those views got approval in their community.

A couple of years before my father’s death, he and my mother went to Germany to rent cars to drive on some tracks, including Nürburgring.

He very specifically wanted Sabine’s taxi service, too, because what better way to learn the best lines on the track than experience them with the master of that track?

My father was, um, quite the awkward person in public, but afaik Sabine was enthusiastic to deal with him as a typical race fan/customer and gave him tips for his private run.

This was essentially his prime bucket-list thing to do, y’know, to drive The Ring, and Sabine helped make that experience as good as it could be.

I have yet to see anything in German or English that disparages her. She seemed like a super hard-working, skilled, witty, and very, very vast driver on one of the world’s trickiest courses.

The racing world is a little darker without her.

The woman is a genius composer who perhaps doesn’t get the recognition she’s earned because most of her work is for video games such as Kingdom Hearts, Mario + Luigi and Final Fantasy.

I will spend my life studying her work, hoping to preserve even a portion of her style in my own art.

If you haven’t heard her work, please do yourself a favour, look her up.

she’s just a f**king beast who rules two divisions like its a piece of cake, and is probably the best female athlete of all time (arguably over Serena Williams even).

Her wife, who is also a UFC fighter, recently had their baby, and in the behind the scenes of Amanda’s title defence fight, they were showing how she would train with her baby around, and you already know that kid is going to have a killer work ethic.

One of her chimpanzee documentaries was my favorite piece of content from an anthropology class I took.

Who coined the term ‘software engineer’ while managing a team that wrote the software for the Apollo Guidance Computer.

Look up the 1202 error and how she had the foresight to write a Multithreaded real time operating system when others thought it wouldn’t be necessary.

She took her role as a woman entering a male-dominated field (Star Trek’s captains), and the impact it would have on young women in the ‘90s and beyond, very seriously. Fully aware of how her portrayal of Janeway had inspired people in real life, she’s taken ownership of it and become a strong and eloquent advocate for women in the sciences.

Honestly, when looking her up on Wikipedia just now, I was surprised and a little troubled to find that she’s anti-abortion (although, being a guy, that isn’t my issue to argue) — but even then, in the same article which cites that position, she stresses that dialogue and understanding with people who believe differently is essential.

A former CIA deputy director. However, early on in her career, she caught a lot of flack for suggesting that intelligence should… ya know… be shared among allies, not just silo’d within agencies and never heard from again. The real big scare she made was when she said this could easily exist on the internet in a classified way, ensuring that enemies never saw the intel that Americans had on them.

Upon surviving the heat she got for that, she continued working on it. Lo and behold, 9/11 happens, and a big reason for it is because different intelligence agencies never just put the pieces together that Al Qaeda dudes had snuck into the country and had a plan to kill Americans. The information sharing she had been preaching all along would have saved thousands of people.

Suddenly people were ready to listen to her, and modern national security hasn’t been the same since.

She took her money and fame and has worked as an activist since basically Potter ending and I can say the world is a better place because of it.

She could’ve easily let the fame go to her head but she didn’t.

Well, I’ve got a few new names to look into!

How would you answer this question?