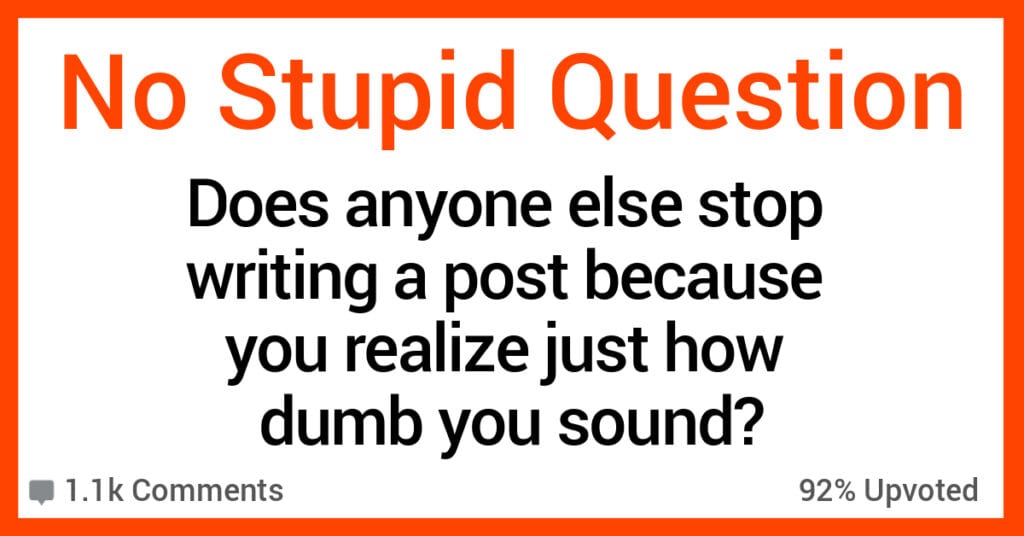 No Stupid Question: Does Anybody Else Delete Their Own Posts Because You Realize They Sound Dumb?

I work from home and as a result get sucked into social media and other corners of the internet WAY too often.

I probably delete posts I make at least as often as I don’t delete them. So I find this very relatable:

Does anyone else stop writing a post because you realise how dumb you sound? from NoStupidQuestions

Why do we do this? Let’s let the citizens of Reddit chime in.

1. Sounded good in my head.

I sort of have this, yeah.

Usually it’s because the thought makes more sense to me in my own head because I have more context than I can reasonably type out.

Like if I realize a post or comment is way too long, I’ll just give up because nobody has time to read all that sh*t, and they’ll just say something snarky and downvote anyway lol.

I abort comments from time to time […] Midway through, sometimes even just when I’m about to hit ‘send’, I second-guess whether I really think the person is actually interested in a factual and open-ended discussion.

Normally, if I even come to have that thought, I delete the comment instantly.

It’s an energy-rationing matter: I could have helped some people to gain insights (or gained interesting insights myself) if I had posted all of the replies in question, but I could also have wasted much time and energy just to feel bad afterwards, which is not worth it at all.

If I do NOT have that bad feeling though, it’s a really good sign that the other party is indeed open to discuss their and my views. Not a guarantee of course, but trusting my gut kind of works out for me for maintaining a good balance between dodging ‘negative energy’ and still finding open-minded discussions worthy of my time and emotional investment.

I do but maybe not due to how dumb I sound but I normally start to think “who even gives a f*ck about what I’m writing?”.

I write comments and halfway through I realise they are dumb so I go spend 2 hours reading up then I come back and finish writing the comment, then discard it because it’s not what I originally wanted to say but I learned from it.

I’ll spend way too long writing out a relatively short post because I want it to sound right, and sometimes I’ll just x right out even though I spent 10 minutes typing it out.

That’s exactly what I do.

I think it has something to do with the inability to properly analyze thoughts until you get it on paper or say it out loud. I’d wager the same thing happens when you’re speaking to someone; you’ll say something, and only then start to think about it a bit more critically. Obviously, it’s much more likely to happen in writing, because that’s a much more private activity (until you post, anyway) so you’re naturally a lot more… unhindered, if that makes any sense.

You’ll write and write, read it over, refine, write some more, write less, read it over again… and by then, you’ve honed down the thought so much that you either answer your own question or begin to see your opinion in a different light.

I’m pretty sure this is a natural process. Pretty sure…

Yeah. Constantly. With commenting as well.

I’ve done it three times in just attempting to reply to this post.

It’s not always because I think my post is dumb, sometimes I just decide that my opinion isn’t adding anything to the conversation, or that my post isn’t interesting, or I decide after going over my post that I don’t want to post and potentially spend more energy responding to replies.

I’m vegan so… About half of the time I’m about to answer someone. Why bother looking up facts and formatting my comment if I’m just getting trolled?

Sometimes I’ll go ahead and continue hoping someone else will read the interaction and get something out of it.

I’m not a native speaker and sometimes I try to make an argument and suddenly realise that what I wrote doesn’t do that or just sounds bad and simply discard.

• it sounded better and clearer in my head
• I realize that it’s not that easy to formulate my point in a concise manner while covering all my bases
• and most importantly: nobody will care anyways, so why write a comment, then wait anxiously for feedback and feeling personally attacked as soon as someone does not get my point or disagrees and then think about that feedback for weeks

I’ve done that as well.

Sometimes I start writing something out of some sort of reaction, but upon the reflection required to put it into words, I find I’ve violated one of Craig Ferguson’s 3 Rules of Posting on the Internet:

In any case, I’ve rarely regretted not posting something like that. I actually enjoy the fact that, unlike a conversation, you have the opportunity to choose whether or not to say something after a period of reflection.

Reddit is one of the most judgmental platforms out there. Don’t sweat it.

This very place is crawling with bots and users with corporate interest. Believe me. Conde Nast is not going to allow a free speech platform on their watch. They have way too many corporate interests and corporate relationships to maintain. This place is a judgmental joke and far from a democratic platform.

I have at least 20 draft e-mail messages that fit this category.

Every now and then I scroll through and try and make some sense of it all, some are as old as 12 months ago, but my mind is like.. keep it, … you never know.

I sometimes just realize how pointless it is to continue a discussion.

I can only use arguments and cite factual sources to convince someone of a fact, but some people believe everything is an opinion and that it is a sign of weakness to admit to having been wrong, so it is pointless to argue with them.

Yeah, it’s called “having a filter”.

More people should have it.

The number one reason I personally delete posts is because I realize that they’re likely to attract way too much conversation that I will get sucked into and thus lose all productivity for the rest of the day.

Give us your thoughts in the comments.