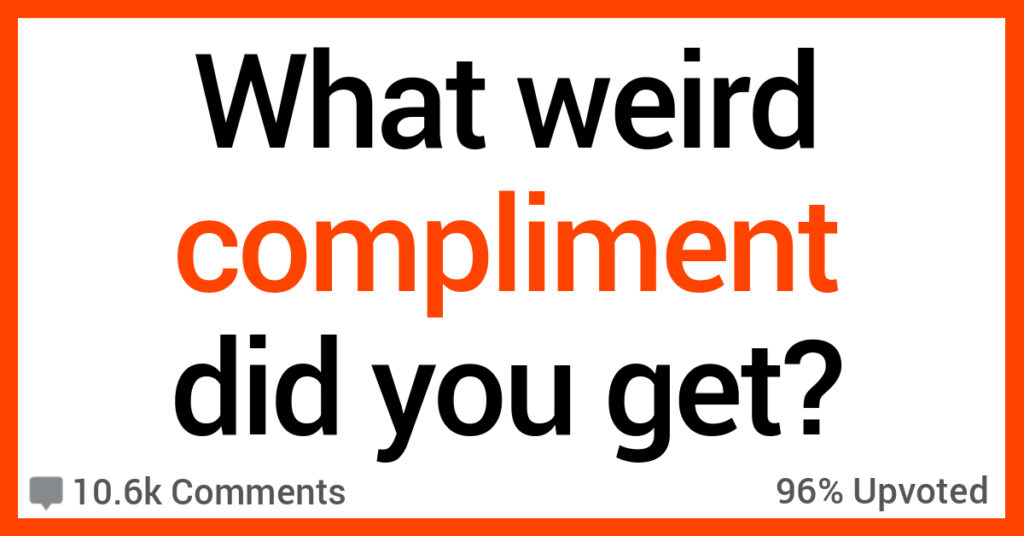 Have you ever received a compliment that just kind of stopped you in your tracks?

What’s the weirdest compliment you ever received? from AskReddit

That I have a very swan-like voice.

She was complimenting me on how I said “your coffee will be ready over there” when we were both working at a coffee shop.

An older woman said I had nice skin (I’m a dude if it matters.)

It came across as a “I’d like to wear it,” but then later that evening I realized the party I was invited to was actually a sales pitch to join some pyramid scam to sell skin products.

So it was less weird in retrospect, but clearly something had gone wrong.

I was at a pool party in college and I saw two girls that looked like they were talking about me.

Sadly I didn’t get either of their numbers but at least now I know that I have nice nipples.

An ex once picked up my hand and told me I had “feminine, delicate wrists”

Also “you’re so… unique looking!” multiple times during my life.

I am a white brunette lady, I am not unique looking, just not conventionally attractive.

I once had an old Hispanic lady that didn’t speak English who I didn’t know have someone she was with come over to me at a restaurant and ask if she could bless my eyes for me.

She said she wanted to bless them so nothing would ever happen to them because she’d never seen anything like them.

One time another guy at the gym who was using an adjacent locker caught up to me on the way out to tell me I had nice feet.

He said that he “notices things like that” and that I must take care of them.

I said thanks. He was nice. Never saw him again.

I was late for school and decided not to shower so i could catch my bus in time.

I arrive to school say hello to a girl I barely knew, she comes up to me smells my sweaty shirt and says “D**mn you smell really good”.

Yeah that was a creepy way to start the day.

In high school, some girls told me I had a cute walk.

I had never thought about how I walked before but it really f**ked me up for a while– trying to make I maintained that “cuteness,” whatever it was.

And realizing that “oh, I could be minding my own business and someone still find me attractive… or unattractive.”

Many years ago, I had a man corner me with his grocery cart at the store, so he could tell me I “looked like a bacon and egg sandwich,” and “good enough to eat.”

He then asked if I had a bf, which I said I did, and he replied “how long have you had that problem?”

Apparently he was into calling women snacks before that was a thing, lol.

A drunk old sailor once told me the shape of the top of my upper lip was very nice.

Very specific and very odd. He was nice though, gave me some (unsolicited but true) life advice as well.

I was told that I had a the healthiest ass the person speaking had ever seen on a white woman.

And yes, I know what he meant by that.

I have a big butt.

And he meant it as a compliment.

I went on a trip to Honduras.

I am a fairly large gal.

I had a man offer to pay my father two goats and a cow if I would marry his son.

Any men I date now are gonna have to bring it hard.

From a child. “Mermaid with legs! Nice!”

And then he high fived me before walking away.

I was cashiering and had waist length teal hair at the time.

I was 16 watching movies with a guy when out of nowhere he turned to me and said “you’re more than one standard deviation hotter than the average person” with such certainty I felt like he had just finished doing the math in his head.

Still makes me smile to this day.

I love these! They’re so fun to read through!