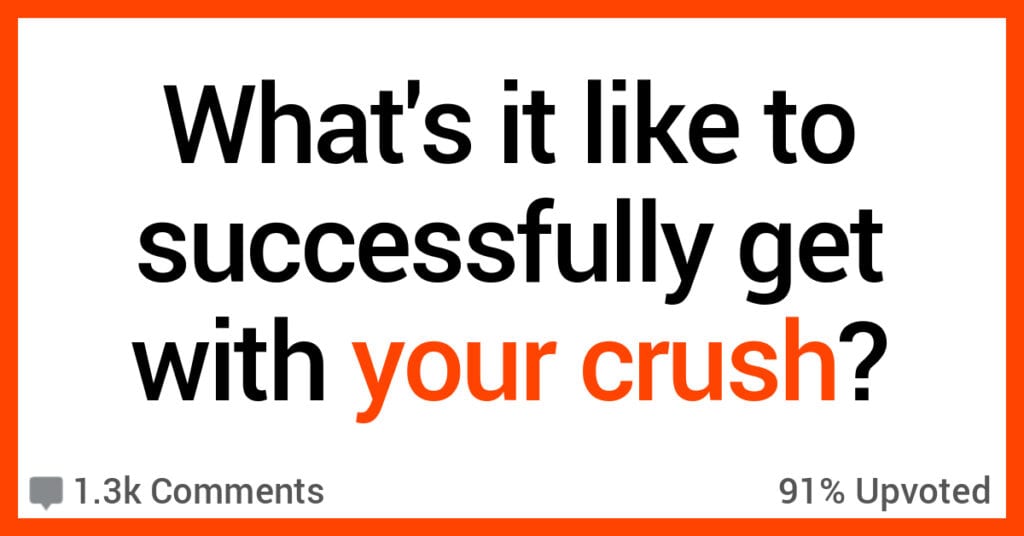 People Reveal What It’s Like to Get With Your Crush

What’s it like to crush it with your crush?

That’s what Reddit user ExtraCirpyTater wanted too know, and so do most of us:

What is it like to successfully get with your crush? from AskReddit

So what’s it like, this mythic experience? Let’s find out from those who have been there.

In 4 words: Not how you Imagine.

Look, the magic of crushes lays on the image you have of them (doesn’t matter if you are friends or not) cause even if you are, relationship changes a lot when you actually get together.

But it also feels pretty f*cking awesome the first moments cause, I mean, you got your crush!!

Because you find out how the image of then you built up is somewhat false.

3. “Wanting feels better than having.”

If it’s someone you also view as a bestie, you might be pretty lucky.

It’s d*mn amazing as long as you remember they have flaws just like you do.

If you made a perfect image of them it’s about to crumble and you’re gonna be disappointed.

Amazing, until he breaks up with you months later out of the blue, and because you’ve invested so much emotional energy into this relationship, you fall into a deep depression that you can’t get out of until you’ve physically moved away two years later

I married mine 14 years later.

In high school I always thought he was sooo hot and sweet (and apparently he was attracted to me too) but I didn’t think I stood a chance so I never spoke up.

We drifted apart after graduation but after a really bad break up 14 years later, drunk me thought it’d be a good idea to get back in touch with him.

I still can’t believe we’re married (3 years now!). I still look at him and think “F*ck he’s hot.” We are basically the same person so he’s really easy to get along with but I’m glad we didn’t date in high school because I was really stupid and insecure and I would have f*cked it all up.

There were definitely moments where I became a high school girl again saying “OMMGG!” when I’d tell my friends about us dating, getting engaged, etc.

So far it’s been great but I got lucky my crush was actually a good person and not a handsome *sshole.

Moved to college and the next morning I had to go to a required group-orientation/tour with people in my department. I happen to stand next to this cute girl who I decide to say hi to and we chat for the next 20 min. She was the first person I met on campus I hadn’t met in my residence hall. We say bye and I don’t see her for the rest of the day.

Somehow, I instantly knew I liked her and wanted to be more than friends, even though I only met her once. However, it turned out she had a boyfriend who went to school nearby. We ended up being classmates every semester and going into the same major.

After 3 years of school, some drama and way too many coincidences for our relationship to be considered normal, we got together and discovered how crazy compatible we were.

It’s honestly like my brain knew the whole time!

Well, not really me but my brother, lucky man.

He had a crush on a girl that had an old crush on him too, so it was only natural they’d get together.

Well, this girl is like a younger sister I’ve never had, and even though she’s my brother’s girlfriend now, we spend more time in sleepovers and talking about him than he does with her. (I’m a girl) Basically, she’s my bff now.

I had a huge crush on a guy in my friends group who was married.

We became very good friends but always appropriate because he was married. He confessed he was unhappy in his marriage. I suggested they go to therapy because he would regret it if he didn’t give his marriage every chance.

He told his wife he wanted to go to counseling. She said she didn’t care that much and they should probably just break up and moved out.

The next week I swooped in and told him how I felt. Terrible idea. Rebound, all that.

I’d never tell someone to confess their love to a friend going through a divorce but it certainly worked for me.

I crushed on a man for 3 years. This man was my manager.

Eventually, he moved to a different department and he and his long-term girlfriend broke up. We began dating. Holy crap… BEST FEELING EVER. I was head over heels for him and it felt like I was constantly on cloud 9, especially when he introduced me to his daughter and family. I felt like… life could not get any better. The man I was pining for, for so many years finally wanted me too, plus I was persistent and that is what drew him to me. It felt so good to do all the things I wanted to do with him, like kissing and being intimate… going for long drives and cuddling.

BUT, yes, as someone mentioned below, it can be bittersweet too. The image you have built up is false and you find out about other things about them that are… major red flags. Sadly, we rushed into living together, and we fell apart so quickly. He brought out the worst in me and took advantage of me – I thought because he loved me and treated me nicely that we would last while he treated other people really badly. Eventually, I became someone he could treat badly, and this was all within one month of moving in together, I knew by the second weekend I had made a mistake.

It hurts if there is incompatibility, but can be bliss if you are both compatible. Sometimes it’s not worth it to get your crush. Now not only have I lost someone who was my friend, but I also lost my love. But he constantly brings me down and I feel like sh*t every time we speak so I guess I dodged a bullet.

…she was different (and more fun and passionate) than what I perceived her to be. I wasn’t expecting her to be it for me… didn’t even consider it. We both still shake our heads wondering why the hell we were never together sooner. And why we wasted time on loser relationships lol Yet maybe it wasn’t the right time for us earlier. I dunno

I figured a lot of guys were hitting on her. I didn’t. I just got to know her better over messaging (we used to work together 5 years ago but she moved away). Finally we met for drinks and sparks flew. Then I came to visit her and I never left and she asked me to move in with her.

I had a huge crush on this guy – we ended up hooking up – and he was the WORST kisser.

I didn’t even think being “bad at kissing” was really a thing because it’s not rocket science really.

But it was the worst.

I fell in love with someone who was married … Too fast, too much, too, well … married.

But things changed, life moved on and now we’re two weeks away from celebrating our 15th anniversary.

I definitely had them built up in my mind, we have certainly been through ups and downs, but I know how lucky I am every d*mn day to have found them.

Sometimes it’s so much more than you even dreamed it could be.

I crushed on a gorgeous South African blonde for a few months.

We made out and it was great.

Then I got to know the person better and turns out, my crush was not very intelligent.

Its like putting the USB in perfectly the first time

Maybe it’s because I’m just not a hopeless romantic, but I seriously doubt anything can feel as good as that last one.

Have you gotten with your crush? What was it like?