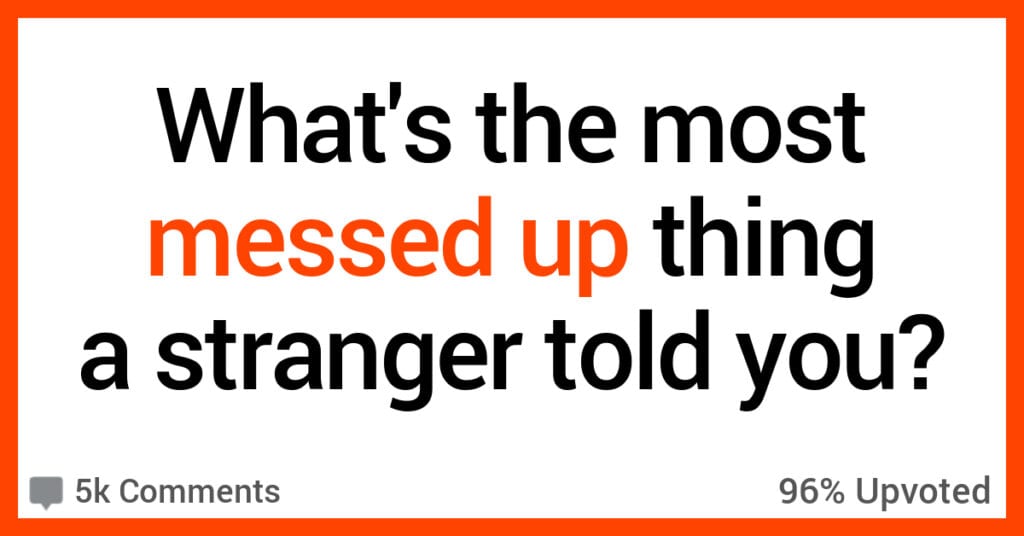 People Share the Most Messed Up Things Strangers Told Them

One phrase that for some reason was cool when I was a kid but has now fallen out of use entirely is “TMI,” or “too much information.”

Turning phrases into acronyms was once, on its own, an entire joke. I don’t know why. It just was.

And when someone hit you with something unexpectedly bizarre about their life, you just said “T-M-I!” and reveled in the sitcom laugh track in your head.

What’s the most fucked up thing someone has told you about themselves after barely getting to know them? from AskReddit

What are the TMI experiences of Reddit? Let’s find out.

I (25f at the time) was at A&E in the UK. I got discharged and was waiting for my taxi outside. This buff shirtless dude, covered in tattoos (they were decent too, imo) comes over and asks for a light. I bought a zippo for novelty so I obliged.

We got to talking and he told me how he had just got out of prison after serving a life sentence for killing his father, after his father murdered his baby sister. Had his records on him and everything (he was at the hospital as he was diabetic and had experienced an issue of some sort after being released – I have no expertise here).

I have never feared and respected a man so much in my life.

I bought him a pint after my taxi decided it wouldn’t be arriving. Decent bloke – we still speak 9 years later.

I remember the first friend I made at my new high school when I was 14 so vividly. Just as we were walking out of the classroom where we had just met she turns around and cheerfully chimes:

Yes, Twilight had just come out. That entire school was so weird.

I remember another girl noticed I had cut myself shaving and insisted on putting a bandaid on for me as she muttered things like “you have no idea how difficult this is for me”. (Yes, she also claimed to be a vampire.)

I used to work at an animal shelter and we had several people who would come volunteer to help out.

One of the women who came there on a regular basis went to lunch with me. She was such a sweet woman, a little older than I was at the time. She proceeded to tell me that she used to go to the park and give old men bl*w j*bs because she felt sorry for them.

Still had to share a room with him a few nights.

My manager at my job in high school decided to tell us about her suicide attempt on my very first day.

She was like, “One day, I decided to take some pills and end it all. I grabbed a pill bottle out of my mom’s cabinet and took a handful without even looking at what it was and then lay down to die. I was so surprised to wake up in the morning perfectly fine. Confused, I checked the bottle to see what I had taken.”

Yeah, it was estrogen.

I sat next to this quiet kid in my Spanish class. He was awkward and had a subtle speech impediment.

One day, I tried to spark conversation with him and he told me that he considered murdering his parents.

My boss at the time had hired an older woman who was re-entering the workforce. He wanted to fire her the first day when she couldn’t even complete the legal paperwork (maybe 20 minutes for the slowest readers) in 8 hours. He quickly lost his patience training her so he pawned her off on me.

Before the end of the first day I trained her she failed at things as I explained them to her, cried, called me a bully for trying to “train her too quickly.” She reported me to the boss and she wanted to report me to HR for creating a hostile environment. I was actually out of town at the time, but he managed to spook her enough by asking if we should just call this hiring a mistake and have her and the company mutually part ways. She straightened up pretty quick apparently.

When I came back a few days later she’s better, and more eager to learn. As we are leaving for the day her husband is waiting for her in the parking lot with her teenage son in the back seat. I pull out in my car after they do and the entire time her son is turned around in the backseat smiling at me through the rear windshield.

The following day she tells me her son has a huge crush on me now. He thinks I’m so hot and he’s going along for the ride tonight so he can see me again. Then this woman, who I have known for three days, tells me all of her teenage minor child’s physical stats including the size of his penis. Why a mother knows the size of her sons penis I do not wish to know.

I actually had to remind this woman that I was more than a decade older than her minor child. To which she sort of laughed and said he’d be older soon enough.

She did not end up working with us for long.

I was doing my practice in a hospital. They brought a young man in the neuro clinic, he was my 1st patient. He was around 30 and he had fallen from a tree while working.

He turned out to have a complicated neurological condition that had nothing to do with his fall. He was also diagnosed with severe depression. He was in there for months and no one ever visited him, the only time he felt a bit better was when I visited him and did some tests to him.

He said “it’s nice when you come and make me play with the coloured toys and make me draw things”. One day he was looking out of the window, when I came in he looked me dead in the eye and told me “you know, if the windows didn’t have protective bars, I’d jump right out”.

I picked up a hitchhiker once that told me he left California after his wife died because the cops were asking too many questions.

Had to do a course and the trainer arrives, introduced himself to the small class of maybe 4-5 people and asked a bit about each of us, he then told us his wife had died 2 years ago and he tried to kill himself.

I felt horrible for him but he seemed genuinely happy with where his life was, I ended up staying back after class and having a beer with him at the bar he was a really cool guy I hope he is still happy.

That he stabbed his neighbour in the neck because he sexaully assaulted his step-daughter.

I’d worked with him for 2 hours at this point.

Some guy next to me on the bus once went into a long elaborate story about how he burned his house down for insurance money like three weeks prior.

I wouldn’t have believed it if his hands didn’t have massive burn scarring.

An old man asked me if I knew when the next bus would arrive and we ended up getting into a nice conversation that somehow led to him telling me about his daughter being being in an abusive relationship with a guy who made her move far away from him and his family so they couldn’t help her.

We were both crying by the time the bus arrived.

Met a woman who worked I child care.

She told me all about how difficult it was working with abused boys and how she got to close to one and had sexual feelings. Showed me a picture and said anyone who meets him thinks he is really nice and not to judge him on looks….then the barman came back with my drink and I left.

That was the entirety of conversation with a VERY drunk and probably sh*tty social worker.

My favourite question to ask new colleagues was: so, what do you do in your free time?

First person I asked: a sh*t ton of drugs.

I…I don’t know what to do with that information.