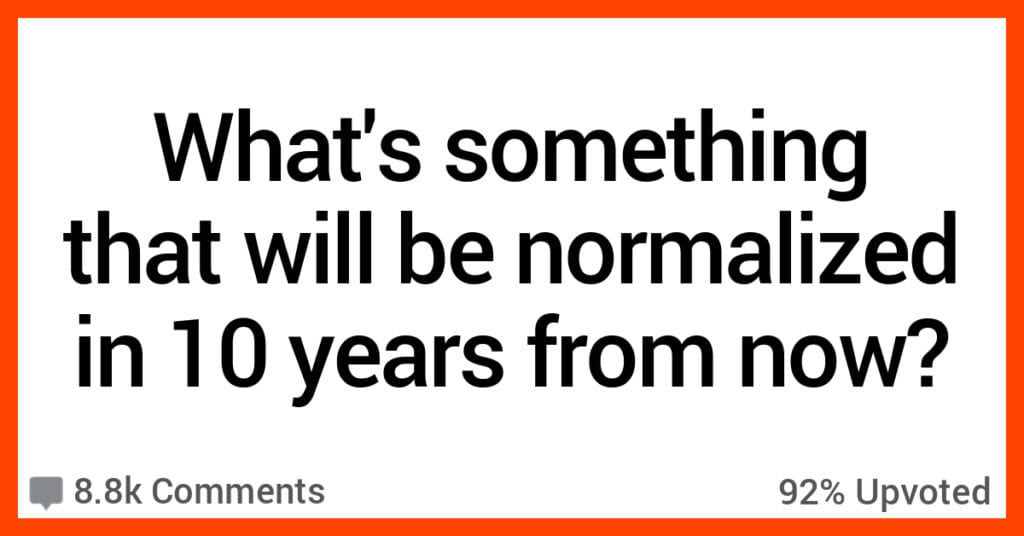 I’m gonna be honest, I haven’t been feeling super optimistic about the future of the planet at large lately.

what is something that will be normalized in 10 years from now? from AskReddit

Does Reddit foresee anything good in our new normal? Let’s find out.

Something that dawned on me a few years ago is that we’re not too far off from having an entire generation where many will have never had their fingers be burned by a light bulb.

I would kill for that kind of flexibility. I severely underestimated how important job flexibility would be to me before I had kids.

I chose to go into healthcare instead of computer science and now I have the worst of both worlds: i make half as much as a CS grad, I have to work nights, weekends and holidays, I have to sleep at the hospital when on call for $2 an hour, and worse of all my job has zero flexibility because Healthcare is always chronically understaffed and over worked.

There are a ton of popular games that cram in slot machines as part of the core feedback loop.

In ten years, kids playing those games will accept that business model as standard practice.

They apparently experimented this in Scandinavia and the results were promising.

I don’t know if it will be an industry practice but I do think it’ll be normalised for a lot of companies to have a 4 day work week.

Being legally allowed to marry as a disabled American.

Right now, certain types of disability benefits get revoked if you marry, forcing disabled people to make the choice between marrying and access to healthcare or the basic payments that let them survive. In some states you’re even not allowed to live in the same household as your partner, because it’s a common law marriage.

Pretty much every time I bring up the fact that I can’t marry, it’s met with a “huh I didn’t know that” shrug and it makes me want to bang my head against a wall forever. There’s currently a ssi bill that may get passed, which removes the marriage penalty in some circumstances but not all. Maybe in 10 years I’ll be able to marry! It’d be nice!

Rather than build apartments, developers will build 15 story parking structures. Each parking spot will come with power so you can live in your sh**ty electric van or a conex box tiny house.

This will become the new, modern variation of trailer parks. The parking spots will still cost 2/3rds of your income. If your van doesn’t have a toilet and shower, there’s a public toilet and shower on level 1 that costs $10 per 15 minutes.

Everyone who lives in these places will work 6 gig economy jobs and have a master’s degree.

This is more or less an inevitability once it is cheaper than raising animals. Now you don’t have to grow guts, bones, skin, eyes, etc. to get your meat. Cutting out so many middlemen.

You also have to do less stuff when it comes to fueling the process — no more tractor fuel, no more feeding an animal, no more putting cheese into f**king everything just because, no more transporting live animals, no more getting your hand crushed milking, no more land waste.

You’ll still need electricity. But a net reduction in input and energy required.

Having weird embarrassing videos of yourself as a kid on the internet.

It’s already normal.. But most people hide them or actively avoid talking about them. Hoping an employer doesn’t find them. Hoping your parents dont see them.

In ten years these videos will be so common they’ll be something we all laugh together about rather than hide them away.

Using mobile transactions instead of credit cards or cash, ordering food, groceries and items online and having them delivered in just a few hours and buying things online the same way you would when you walked into a normal store.

I’m hoping a stronger focus on mental health. I think we’re close but there’s still a stigma with therapy and other mental health treatments.

My wife just graduated as a psychiatric nurse practitioner. The amount of people who self-medicate with alcohol, drugs, activities, etc is staggering when you consider how we all have issues.

I grew up in a house where you just deal with it or swallow it. I spoke with someone the other day who truly benefits from therapy but her final statement was “but it’s so expensive”.

Yeah blending online shopping and VR is going to take over one day.

Imagine people who can’t/don’t want to drive, older people, anybody who wants to go shopping but can’t. You can put a headset on, still walk around a store for hours and get that stimulation some people need.

Maybe bump into other virtual shoppers and chit chat (this social interaction is extremely important the older you get for mental strength into older age). It’s just an overall net positive I feel. Instead of looking at 2d items on Amazon which was cool for the first 10-20 years.

Where I live the average house price just went over £500k. Average rent is £1300 per month for a one bedroom apartment with no car parking space or outside area.

“Just get your head down and save up for a year for a mortgage, like we did” say the older generation lol

I live on a very small island. A lot of people will have to move away to be able to afford just to live but that will be moving country, not just moving elsewhere in the country they grew up in

The weather will stop being reliable enough for outdoor farming and farmers are going to have to start investing in vertical farms to get the necessary output.

This is going to put a ton of farms out of business, but the weather was already going to do that anyway.

14. Physician-assisted suicide (aka Right to Die)

Had to put my 13 year old dog down a couple of weeks ago which got me thinking that when our pets suffer, we’re heavily judged if we DON’T end their pain.

But my grandmother, who is ready to go, has stopped taking her medications and doesn’t want to eat or drink and is making herself more miserable TO go.

This is a woman who knows what is happening and wants it to happen, but we have to watch her put herself through this. It’s an interesting system we have.

Cheers to the future, I guess?

What do you think will be normalized in 10 years?