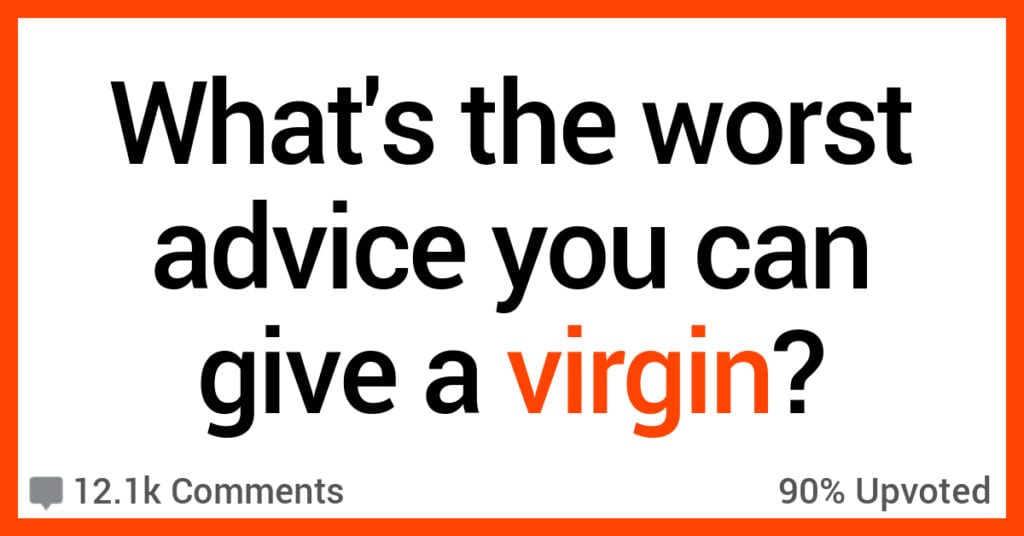 People Share the Worst Advice You Can Give to a Virgin

You always remember your first time. Though not always fondly.

Maybe that’s because you got some bad advice? But surely not as bad as the advice found on this thread…

What is the WORST advice you can give a virgin for their first time? from AskReddit

The people of Reddit, as usual, did not disappoint.

It should be fairly obvious, but the rest of the page is going to be very weird and very NSFW.

Poking holes in condom will give you some breathing room.

2. Fast and the Furious

Ladies love pure speed, so as soon as those panties come off you want to get in there as quickly as possible. Once you’re in you need to keep going, maintain that energy until you’re finished. Y’all know what a jackhammer is right? That’s basically the only way to make them feel good.

Girls say that they can c*m but they really cant, its all imaginary so don’t worry about it.

If she’s upset afterwards then that means you aren’t fast enough.

Work up those core muscles.

Also! Condoms are a scam. They advertise like they help avoid pregnancies but really it just makes those lil guys swim faster. So make sure not to use them. Ever

Make sure to bite the b*lls

Bop It is a sex education toy

Women love it when you vigorously finger their belly button.

Once she’s wet enough start slipping in more until your whole hand is in then slowly inch your way up to the elbow. You should feel a bit of a tug or pull on your arm by now and that means it’s safe to start the other hand in.

Once you get to biceps take a deep breath and ease your head in. The pull should feel pretty strong by now. Torso usually goes pretty smooth but you’ve gotta be gentle getting the hips in. Then the legs will go easily. Once you’re inside you can start to stretch out and now you’ve got a skinsuit

9. Learn from my mistakes

When getting a bj, tell her just right before you c*m that you’re about to c*m.

So she takes it out of her mouth but doesn’t have time to get out of the way and gets it all over her face and In the hair.

Absolutely didn’t happen to me at any point of my life, I promise.

The hole only appears if you sing the entire lyrics to ‘The Ketchup song’ three times beforehand.

That’s what the term ‘foreplay’ is.

Your b*lls go in the condom

Remember that it’s absolutely not about being gentle and caring.

Just flop around on top of them like you’re a cod that’s been dragged out of the depths of the oceans.

Girls you don’t need to move or do any of the work.

Just lay there and think of the flowers.

Sex is an emotional experience.

If you’re not sobbing uncontrollably and/or laughing hysterically throughout the entire process, you’re doing it wrong.

My best friend and I in high school were in relationships with a pair of best friends. We go over his girls house, the 4 of us, and are hanging out. They decide to go to her room for “sexy-time”. A few minutes later I hear my friend hysterically laughing… I’m like wtf… he busts out of the room in his boxers still laughing hysterically. His girl wanted to give him a “blow job”… apparently in her mind that meant something very different than what everyone on here knows it as… she was literally blowing up and down on it, like she was trying to blow out birthday candles. He gently tried to correct her and she vehemently stated that this was how it was done! Needless to say, he got no action and their relationship ended abruptly thereafter.

I think it’s safe to say no one should follow any of that advice ever under any circumstances.

What bad advice would you add?