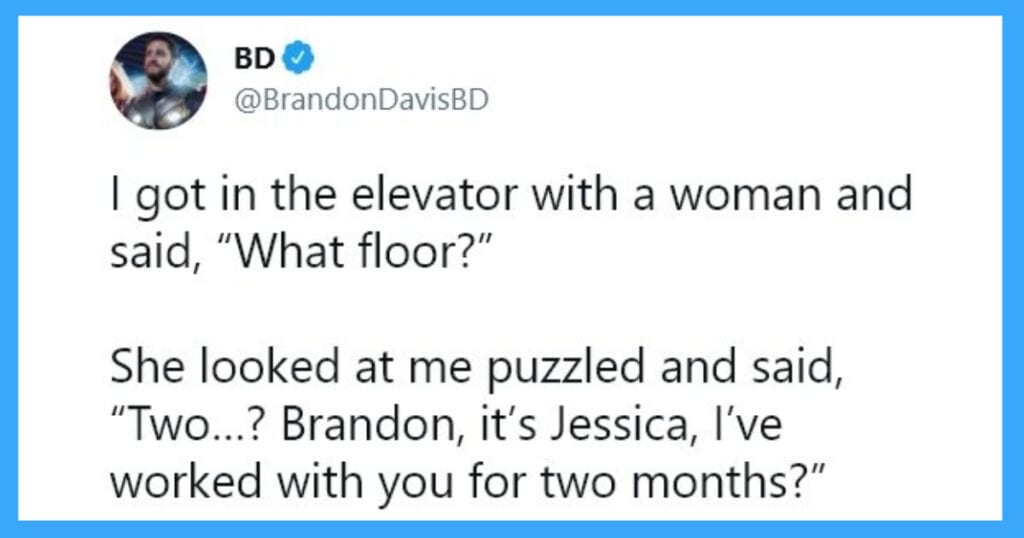 People Share Their Most Embarrassing and Hilarious Work Fails

The only thing worse than going into a job you don’t love every day is epically failing at that job.

But that’s not gonna stop these people from telling the whole world about it after a prompt from account @b3ta asking for “work felated f*ck-ups.”

Sounds like you really unmade their day. And yours too!

I accidentally sent an email to 200+ grad school applicants that their application was insufficient on the day of the application deadline. It was also my birthday! https://t.co/gTLtWped6p

14. A single piece of paperwork

It ruined the ENTIRE case. I was there to watch and everyone in that court started staring at me like oh no https://t.co/SUxLkggNDf

I dropped a glass of red wine on the head of a very blonde baby when I worked at Olive Garden. https://t.co/UHNbv0GRbt

It’s downright weird that this is a real job description.

I got in the elevator with a woman and said, “What floor?”

She looked at me puzzled and said, “Two…? Brandon, it’s Jessica, I’ve worked with you for two months?”

Where’s the lie though.

When I was a 9-5er I once tweeted “Mitt Romney has the face and soul of an impoverished crocodile”…..from the company Twitter. https://t.co/A2u7nCIBqV

9. The broadside of a barn

Be careful what you do in anger, it may follow you forever.

Was this kid under the impression before that giant singing rats were real?

I worked at Chuck E. Cheese as Chuck E. Cheese. The first time I put the costume on to go dance for a birthday I didn't put my glove on all the way. The kid saw a piece of my skin and started screaming "HE'S A FAKE" then a party of 8 year olds tackled me until the song ended. https://t.co/Dm4sBnKWrk

Misuse of the various email reply options fill me with dread on a daily basis.

I replied to a confidential IGN sales email with an inside joke from college, so I BCC’d my college friends. One of them “replied all,” and my boss’ boss came out of his office and said “Greg, why is someone with a https://t.co/cj5Fc2R6bC email address responding to IGN emails?” https://t.co/FeJOku9rz2

Well, what would there be to mention about it?

I told a boss I was sick of being treated like a fucking idiot, caught my foot in the wire of his phone as I stormed out, fell over, smashed the phone and really hurt my knee. Then I just limped out. And never mentioned it EVER again. https://t.co/UJjVg3NrBo

Kinda surprised they didn’t call the cops to investigate or something.

Probably that time I greeted some new parents to the kindergarten and my jeans fell down.

They never came back. https://t.co/lVm7AnesIo

The sort of thing you’re not easily gonna forget.

I was leading a band into a studio and let the heavy door go behind me forgetting the lead singer was blind. The noise is made as it swung into her face haunts me to this day. https://t.co/KWe0biNCw9

Wait there was a Kardashian mobile game?

a few years I was supposed to be cleaning the bathroom but I was actually sitting on the sink playing that kardashian game & the entire sink broke off the wall https://t.co/v41JdjNWaA

I’m curious to know what this even means.

I once shot an interview in slow motion. https://t.co/sRmaP2tTGU

Some bloke was buying flowers and I was like “Awh did ye fuck up?😂” and he said “no my ma just died” WHY AM I LIKE THIS https://t.co/0ysdywbtZY

If you haven’t had a great day at work, try not to worry about it too much. Maybe these examples made you feel better?

What’s a screw up you’ve encountered?